As in the previous years, the CGAL Project will be present at Siggraph. Having 20K subscribers on cgal-discuss@inria.fr, we are pretty sure to find at least 100 subscribers who also attend SIGGRAPH, and who would like to share the fun of a CGAL Flash Mob in front of the convention center

If You Plan to Participate

Before 1st of July

Drop a registration mail with your name, and t-shirt size so that we know how many t-shirts we have to provide.

About a week before Siggraph

Learn the 60sec CGAL performance. It is important that we are all perfectly synchronized, so please learn the gestures and words by heart, imitating what we teach on the youtube video that we will post on 15th of June.

During 26th of July

Pick up your favorite t-shirt at the CGAL booth #667. We will at the same time communicate you your "personal spot" which will depend on the final head count. We will communicate when exactly the performance starts. It is synchronized with the end of the key note (the exact time is not announced yet), which is generally boring (so you don't miss a lot), but surprisingly well attended (so we will have a huge audience, coming from a boring event).

Identify your personal spot so that you know where exactly to get the next day.

Walk 2min away and memorize where you are as "start spot"

We start the performance at time T.

Put the CGAL t-shirt on, and put another t-shirt on top. Preferably wear a black jeans. If you want one of the spots in the water, better wear Bermuda shorts.

Be at your start spot. Do not rush to get there.

Head to your personal spot. Rush, as this raises attention.

Rip off the cover t-shirt and start the performance.

Put on the cover t-shirt and walk away as if nothing had happened. In fact nothing has happened and it was all a dream

We will cover the event with a HD camera, and currently apply for a permission at the Siggraph Organization Committee as well as at the Anaheim City Council to film the CGAL Flash Mob with a drone.

Google Grass proved that Cannabis makes C++ developers more productive, and as a side effect more funny, so feel free to do what you want at T-30. As the California law is still relatively strict, please be sure to carry your Medical Marijuana Identification Card with you, in case you are resident of California, or the most recent prescription you obtained from your doctor.

To keep the moment of surprise, don't mention it to people who do not use CGAL, even if they are your office mates.

Alternatively, convince all your colleagues, tweet it, retweet it, or whatever.

We will be in the area in front of the East entrance. 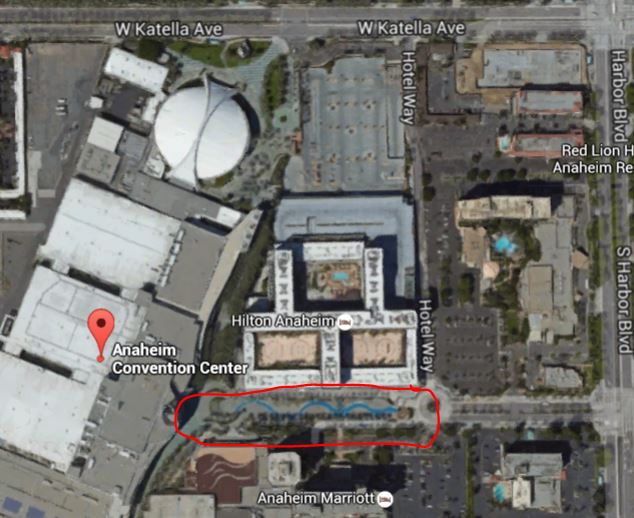 Stand along the palm trees, and in the water. When you register please let us know if you are ready for the water.

See you at T