New in CGAL: Tutorial on GIS

New in CGAL: Tutorial on GIS

Geographic Information Systems (GIS) aim at modeling, processing and storing geographic data. Many applications in GIS rely on specific data structures such as Triangulated Irregular Networks (TIN) or raster images. Some of these data structures can efficiently be computed and processed by the CGAL library.

Although the CGAL library does not provide a GIS package per se, many of its existing algorithms and data structures can be used for GIS applications. For example, combining the 2D Delaunay Triangulation with projection traits makes the generation of TIN a very simple and straightforward operation.

Because applying the geometric tools of CGAL may not be such an obvious option to GIS developers, CGAL now offers a Tutorial on GIS. This tutorial covers many packages such as Delaunay Triangulations, Classification, Point Set and Polygon Mesh Processing... It explains how to combine these various tools into efficient GIS applications: generating Digital Terrain Models (DTM) with ground estimation, rastering at any resolution wanted, contouring height isolevels, etc.

The whole tutorial is illustrated by screenshots of point clouds and meshes, and by code snippets. All of these code snippets form a complete program that is provided and that can be compiled and run by users. 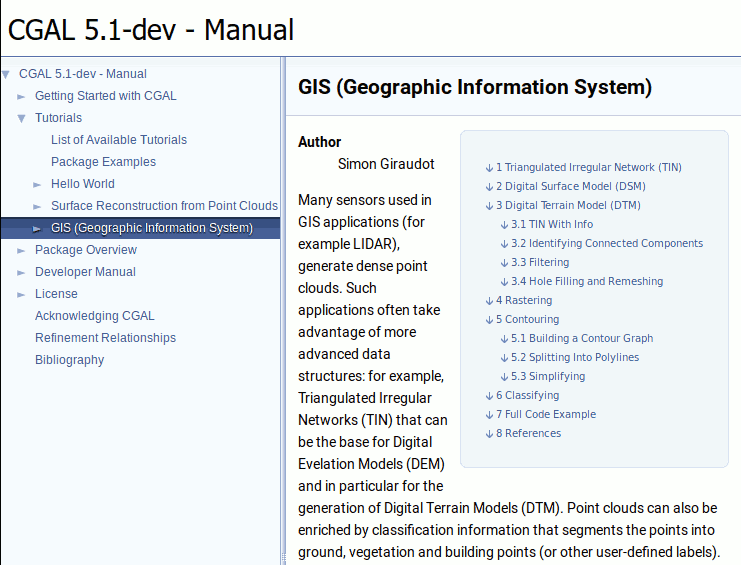 The new Tutorial on GIS.